"No Way Out Of Africa" Lecture at HafenCity University Hamburg

According to the ‘Out Of Africa’ theory a small group of approximately 150 people left Africa some 70.000 years ago in order to populate the rest of the world. At this time it is assumed that the human tribe counted 5.000 members, a small enough group to imagine that at this moment we all knew each other. In a way we all are descendents from a local village in Africa.
For 69.500 years the people moved away from each other and from their common origin in Africa. The only 500 years lasting globalization, which started with shortcutting the landlines by high-sea waterways, marks the reverse thrust of this movement. Globalization is the worldwide unification party who surpassed its climax already some time ago. Evidences and a panoramic view on the major happenings of this party are missing.
This lecture is an attempt to provide an overview and tries to show the impact on our cities and citizen. 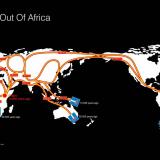