The Earth is our largest inhabitable context, our habitat, our biosphere. Yet its true spherical shape was confirmed only 500 years ago with the first voyage around the world, known as the Magellan Elcano Circumnavigation. The two explorers left Spain in 1519 and returned in 1522 from a three-year expedition that is seen by many as the starting point of globalization.

Many voyages followed, but it would be centuries before the advent of the railway provided explorers with the overland short cuts that accelerated their ability to circle the Earth. In 1870 one such adventurer, the aptly named George Francis Train, took advantage of the new mode of transport for his record-breaking trip around the globe in only 80 days. Three years after that achievement, Jules Verne published Around the World in Eighty Days, much to Train’s chagrin. The latter apparently went around proclaiming ‘I am Phileas Fogg’ to anyone who would listen, referring to the main character in Verne’s book.

The novel fuelled a rage for setting ever faster records, a rivalry financed largely by newspapers. In 1889 a race around the world was organized between journalists Elizabeth Bisland of Cosmopolitan and Nellie Bly of the New York World. Seventy-two days, six hours, 11 minutes and 14 seconds after her departure, Bly was back in New York. The trip made her famous, and she became the subject of a Broadway musical and several movies.

Better railway infrastructure made the trip even shorter. John Henry Mears set two records, the second in 1928, when he reduced his time to less than 24 days. Although the routes varied, fixed stepping stones along the way included New York, Yokohama and Moscow, until the day that aviation was introduced to the game. In the early days, the most spectacular and most widely broadcast circumvolution by air was the 1929 flight of the LZ 127 Graf Zeppelin. American newspaper publisher William Randolph Hearst paid today’s equivalent of $2.5 million for the exclusive media rights to that event.

Thirty-two years later, Yuri Gagarin boarded Vostok 1 and orbited the Earth in 90 breathtaking minutes, smashing every previous record. Today, the well-funded explorer can book a seat on an orbital flight almost as easily as making arrangements to fly to Paris or Tokyo. Even so, special achievements still make their way into newspapers: people who cycle or walk around the world, those who can claim to be the youngest or the oldest to accomplish the feat, and so on. The speed and comfort of travel have turned a once perilous undertaking into a touristic option, but on the way we should stop to consider the fragility of the planet we share. 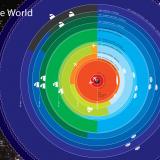