TD designed the cover art for the first full release by Makyo Star , an alternative pop/punk rock band from the United States of America. There will be 10 songs on Makyo Star's debut album. Each song on this album is visually represented by a circular waveform of the first refrain. These waveforms are ordered in decreasing size from 001 to 010 and subsequently overlaid, resulting in the red star on the album cover. 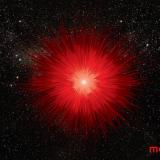