The first high speed train (HST) deployed in Europe was the railway between Florence and Rome in 1978. Since then, more than 6,600 km of HST tracks have gone into operation, and more than 11,000 km are currently planned for the European Union. HSTs appear to be the most powerful and most environmentally friendly competitors of short-distance air travel. No less than 80 per cent of all trips between Paris and London, for example, are by train. Yet in the past 20 years, transport by both rail and air has made a radical change in Europe’s travel timetable, thus making a substantial contribution to the ‘Shrinkage of Europe’. Cheap flights, fuelled by the EU’s deregulation of the domestic airline market in 1997, and super fast trains, stimulated by EU subsidies and regulations, are key forces behind the integration of Europe’s population.

Nowhere is the spatial planning power of the European Union more visible than in the current state and shape of its HST network. It’s been only 20 years since Spain, for instance, began the construction of its high speed infrastructure, and today the country possesses Europe’s longest HST network.

One obstacle to the achievement of a common high speed system in Europe, however, lies along certain borders of the Continent, where gauge widths differ. The integration of the newly established Iberian network (Iberian gauge) is on hold, awaiting the development of technology that will allow trains to switch gauge widths more easily. Turkey, however – a country targeting a 10,000-km network of high speed lines by the year 2023 – uses the standard gauge. Turkey’s Marmaray project, featuring the world’s deepest undersea rail tunnel, is already under construction beneath the waters of the Bosporus Strait. In a few years, an updated version of the map shown here will include Turkey and a rail route that transports passengers from Vienna to Istanbul in less than six hours. 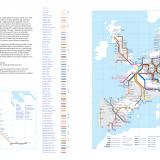