The tragedy of 3 October 2013, the day that more than 360 people died when their boat sank off the island of Lampedusa, was a clear signal that something is fundamentally wrong with Europe’s borders. Sailing from Libya, these migrants were attempting to reach the Italian island. The prosperity, equality and freedom of travel that are celebrated within Europe are not automatically granted to outsiders, and the deadly disasters at its borders are a direct consequence of an insular attitude.

The implementation of the Schengen Agreement in 1999 eliminated the borders within Europe and led to the externalization of security and the creation of ‘Fortress Europe’. This resultedin a shift from sharp, linear borders to borders in the form of buffer areas, as expressed in the concept of a ‘hard core’ surrounded by‘concentric circles’.1The hard core is secured by the Schengen system andthe extended core by the Frontex system. Around the latter is a ring of countries regulated by the European Neighbourhood Policy (ENP).

Officially,under the ENP the EU grants financial support in exchange for collaboration. Examples from the past show that European politicians have no fear of shady deals. Muammar Gaddafi, for instance, famously demanded €5 billion in EU aid in 2010 to stop a tide of African migrants who ‘threaten to turn Europe black’.2 Brussels gave him some of the money requested, and the Libyan dictator duly sealed off his country’s ports to migrant-smuggling boats leaving for Europe.

As you get further awayfrom the hard core and as more layers of border security overlap, surveillance methods and border controls become more severe and aggressive, sometimes leading to human rights violations.

An example of a human rights violation caused bysurveillance: in 2011, when a boat in the Mediterranean overloaded with 72 people sent out a distress call, fishing boats, the Italian Coast Guard and a NATO helicopter responded with a supply of water and crackers and then turned away. Two weeks later, when the boat stranded in Libya,it carried only nine survivors.3

An example of violation caused by border control: since 2012, hundreds of refugees attempting to cross the Greek-Turkish border by boat have testified to push-backs in the Aegean Sea by the Greek Coast Guard. As vessels are pushed back to Turkey from Greek territorial waters, refugees are abused in the process.4

Eurosur was introduced in 2013 to create a single integrated surveillance network. Although the programme offers no operational changes and has no life-saving function, it does allow for moreaccuracy in counting numbers of victims. As conflicts increase at the gates of Fortress Europe, technology has no solution for making its walls more humane. History proves that those who build a wall invariably end up on the wrong side of it. 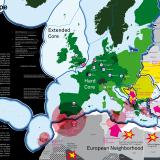