Let’s imagine the earth as a large house, a palace. This palace would be divided into 198 rooms, called nation states. This is not a lot of rooms, if one considers its vast surface and its 8 billion inhabitants. For example, the Palace of the Parliament in Romania commissioned by Nicolae Ceaușescu has about 1.100 rooms.

All 198 rooms of Palace Earth have different security systems and which rooms you are allowed to visit depend very much on the room you are addressed to. If residing in the room labeled “Germany”, one can visit 177 other rooms without even knocking on the door, while a person residing in the room labeled “Afghanistan” can only visit 25 other rooms. For the rest of the rooms one has to write a request for visit and very often one has to be invited by a person living in that room to gain entry, a sometimes very long and tedious procedure, which can still result in rejection. Thus the size of Palace Earth depends very much on the room you are born into. For people from the rich Western Wing of the Palace it is the largest and these people can visit up to 90% of the rooms, while people living in the poor eastern or southern wing cannot even visit 15% of the rooms.

The key to all of the rooms is the passport. A document that is, in its current state, not even 100 years old. No one in the entire palace has the key to all of its rooms. Yet, surprisingly, everybody has the key to a specific group of 15 rooms, which don’t have any entry restrictions at all! So there are 15 rooms in Palace Earth where the entire palace could meet at any time. In terms of functions, these 15 rooms are predestined to serve as meeting rooms. It is time the United Nations, an organization that should represent all inhabitants of Palace Earth, introduce an open-door policy, pack their bags and move into one of these 15 rooms. 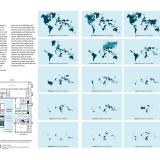