In 1970 during a meeting of the United Nations an agreement was made that the industrialized nations will strive to reserve 0,7% of their Gross National Product for foreign aid. This undertaking was reassured several times since then at the meetings of the G8 – the seven richest countries of the world plus Russia.
Almost thirty-five years later not much came of it came true. Only a handful of the twenty-two industrialized nations that are members of the Development Assistance Committee (DAC), hold on to the UN agreement. Out of world’s seven largest economies not one is coming even close to the 0,7 % target. Embarrassingly Italy with only 15% and the United States, world’s most powerful economy, with 0,16% appear at the very end.
At the G8 summit in Gleneagles, Scotland “the biggest debt settlement the world has ever seen” should relief 18 poor counties from their burden of debt. Yet if one compares the money that will be forgiven with the sum the rich countries refuse to pay, this “historic agreement” turns out to be an awkward farce. Generously the US has promised to repay an estimated amount of $ 16,7 billion while, if it would stick to its promises, an amount of $60,50 billion should be available this year; a sum that would on its own relief almost all 18 eligible countries from their over decades accumulated obligations.
Producer: Theo Deutinger 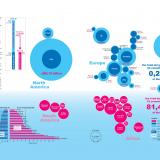