In the late Renaissance, around 1650, the Grand Tour became not only a tradition but almost a compulsory requirement for educated upper-class Europeans in search of art, culture and the roots of Western civilization. Some 200 years later, a system of railways that provided better affordability and faster travel times spoiled the Grand Tour for the aristocracy, while opening the door for the masses. Today’s Grand Tour is a global affair. Coach bus services offer package deals to passengers from the Americas, India and China. Sign up for ‘The Little Hopper’ or enjoy ‘European Highlights’. Choose an eight-day jaunt or a nearly five-week trip for prices ranging from €747 to €7,344.

What actually defines ‘Europe’? The itinerary of an average European bus tour reveals a cruel answer to this question, well known to travellers from abroad: London, with its three large airports, serves as the entrance point for most of these tours. Heritage-loaded Italy – and especially Rome and Pompeii – was a major destination for the Grand Tourists of 1650 that continues to attract 21st-century globetrotters. Everything along the London-Paris-Rome trajectory is ‘worthwhile to be visited’, including a rather dull city like Lucerne and often bypassing touristic marvels like Prague and Budapest. A strategic position tops excellence.

The digital camera has replaced paper and pencil, and the speed of two-dimensional reproduction has accelerated the European experience. Bus-hopping pilgrims who seem to take in the sights only through the lens of a camera are synonymous with the ‘been there, done that’ style of observation. ‘Cultivated tourists’ tend to look down on the herds of rubbernecks gaping at the ‘The Wonders of Europe’ (12 days, €1,238), yet tremendous interest does not make less exquisite. The Pantheon is still the same amazing building it was 400 years ago – millions of eyes and snapshots have not diminished its majesty. The popularization of the Grand Tour should be understood as liberation from an elitist society and as an opportunity for more and more people to experience the beauty of architecture. 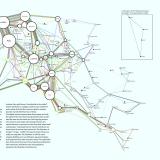