i core, you periphery

I Core, You Periphery
lecture at the HCU Hamburg on 18 april 2014

The smallest entity of a core (a center) is a human being;paradoxically exactly the same is true for the periphery. Thus the same human being, on the very same location can be both, core and periphery.
Speed and individualization, set in motion by the automobile and the mobile phone, accelerated and reinforced the core-periphery paradox. The resulting mass-mobilization goes hand in hand with extreme individualization, which seems to have reached such peaks that it produces collectives. Nobody can belong to a niche (periphery) when the niche consists of thousands or millions of people. In a mass-mobilized world the more pressing question seems to be where and what is the periphery and how is its relationship with the center. This is essential since the more dynamic the relationship between center and periphery, the more dynamic is planning and design.

Theo Deutinger will highlight the above mentioned by presenting three projects “Triple Core”, “City of Athletes” and “David and Goliath”. Together these projects unfold a compelling picture about the interrelationship between core and periphery in Europe. Theo Deutinger is an architect and founder of TD, an architecture studio. Apart from teaching and giving talks he is a writer and designer of socio-cultural maps. 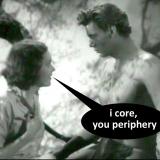