IKEA - The Empire on which the sun never sets

IKEA is a multinational empire that penetrates with its wide range of products from Ålesund till Zorg (IKEA-language) the last corners of the countries it 'conquered'. Like the British Empire introduced its political system and its laws in all colonies in order to get control of governance, IKEA does the similar in its fight against global tastelessness in design and for higher profits.
But unlike the British, IKEA is enthusiastically welcomed wherever it settles. Openings of new IKEA stores and special sales often turn into public mass events causing traffic jams and sometimes even casualties. The most severe incident happened at the opening of a new IKEA store in Jeddah, Saudi Arabia on 1st September 2004, where through to a stampede three people got killed and 16 others injured.
Where on Earth IKEA appears the world turns blue and yellow and the start of the New Year shifts from 1st January to 1st of August, celebrating the release of the new IKEA catalogue, the only print medium with a larger circulation than the bible. IKEA is an empire that is very hard to resist, if one gets used to the power and convenience of its design it is hard to imagine a life before.
We are badly prepared for a life of independence. By withdrawing its furniture stores, IKEA could throw an entire country into the state of interior design anarchy, leaving behind a flabbergasted mass of consumers. 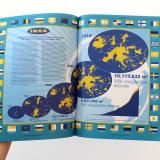