The Big Mac Index, a global cost comparison of one McDonald’s Big Mac hamburger, was introduced by The Economist in 1986. The Lack Index is a European version of the concept, because what McDonald’s is to the US, Ikea is to Europe – and Ikea’s Lack table seems to be a good equivalent of the world’s most famous hamburger. What these indexes try to show is the real cost of a Big Mac or a Lack table in terms of what people in different countries earn in relation to what they have to pay for these items (based on an economic theory known as ‘purchasing power parity’).

Comparing the two indexes, one is immediately struck by the fact that they are complete opposites. Whereas a Big Mac is cheapest in poor countries, a Lack table is generally cheapest in rich countries. The discrepancy could be explained by shipping costs, were it not that a Lack table in Poland, where most of these tables are manufactured, is more than double the price (€7.91) of a Lack table in wealthy Switzerland (€3.60), where Ikea founder Ingvar Kamprad lives. Two other Lack factories, both operated by Swedwood – one in the USA (Virginia) and one in China – can also guarantee low shipping costs to the Americas and to Asia.

A more likely explanation for Ikea’s pricing policy lies in consumer behaviour. The price can be lowered significantly only in a country that has reached the point at which furniture is consumed at a rate close to food. In countries where Ikea furniture is fashionable – something to cherish and hold on to – it falls under the category of ‘goods’ and is, therefore, more expensive. If you look at it from this perspective, the price is defined not by the cost of production or shipping, but by consumer appreciation. In Norway – nowhere in the world do you pay less for a Lack table – it almost makes better sense financially to buy a new one than to use the recommended ‘mild cleaner’ on the one you bought last month. 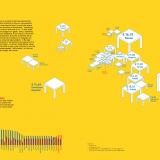