Religion and politics have always been dangerous bedfellows. As far apart as the EU and US seem to be in terms geo-politics, there is one common thread in their political agendas: the secularisation of Islamic countries. While the EU tries to asserts political pressure on Turkey’s government, the US uses brute force in Iraq. There is another less publicised and seemingly conflicting movement quietly pushing at the doors of power on five continents. Opus Dei (Work of God), the controversial organisation at the heart of the Roman Catholic Church, is seeking to recreate an alliance between the spiritual and secular worlds, last attempted only with catastrophic results during the century.

Founded in 1928 by the Spanish priest Josemaria Escriva, Opus Dei counts 80,000 members around the world. It is not so much the member-count as the power sum of its members that makes Opus Dei nothing short of spectacular. Under John Paul II, the organisation has become the most dominant force in the Roman Curia and was declared a “personal prelature,” that is, a church entity unsupervised by local bishops and dioceses. Said to be richer than many Third World states, Opus Dei publishes no financial statements, no membership lists, and it submits reports - once every five years - only to the pope.

The organisation’s aim, according to Crônica, a magazine for members, is “to hallow and Christianise the institutions of the peoples, of science, culture, civilisation, politics, the arts and social relations.” Therefore, the spiritual, as well as secular, network of Opus Dei is well designed. The direct and most ideal connection to the pope is through his spokesman, Joaquin Navarro-Valls, a celibate lay member, who holds ministerial status in the papal entourage. Additionally, there are 24 Opus Dei active bishops worldwide, including Juan Luis Cipriani, the first voting cardinal for the next papal election.

Outside the Vatican, Opus Dei is well represented throughout Latin America, where it has penetrated all levels of government, military, and business and financial establishments. In Europe the influence of Opus Dei is largest in Spain, the home country of the founder. As a socio-religious phenomenon, it was intricately involved in politics during Franco’s reign. After a series of ups and downs, the group celebrated its peak political moment in the late 90’s. The fall of the Joze M. Aznar’s government, however, resulted in a crew of six Opus Dei-associated ministers being forced from the political foreground.

Continuing its involvement in the political landscape of Europe, the stealth operation of Opus Dei comes more and more revealed. After Rocco Buttiglione (Opus Dei sympathiser) caused uproar in the European Union politics, ending in defeated ambitions to become an European Commissioner, Great Britain is next. The latest struggle involves discussions of whether right-wing Catholic opinions are influencing political decisions made by Ruth Kelly, Great Britain’s minister of education since January 2004. After heavy public pressure, Kelly had to confess her membership in Opus Dei last month and is, since then, busy trying to convince the public that her “spiritual support” is limited to private matters. 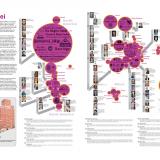