The rise of the icons has been going hand in hand with industrialization, increasing mass mobility as well as the growing mass communication. The highest concentration of sign language can be found in public spaces as roads, airports and the world wide web, areas where a high diversity of nationalities but also a high diversity of levels of education can be expected. The outcome of this is that kids as young as 4 years old already know the meaning of a zebra crossing, a sign for toilet or the YouTube icon even before they learn to read and write.

New sets of cyphers are added in waves to this language. One of the earliest was the introduction of international road sings which was standardized by the Parisian International Road Congress in 1908. To deal with the foreseeable rise of mass events and mass tourism Otl Aicher, Germany’s most influential graphic designer, introduced another set of icons with his representation of athletes for the summer Olympics in 1972. The next wave of sign language was introduced by industries like furniture manufacturers who turned more and more to graphics for their worldwide distributed setup and assembly instructions. While today Emoji’s appear on a rapid speed, providing a quick way to express feelings to a large set of intercultural friends.

With the upcoming introduction of augmented reality, even more signs might appear. Every square millimeter of the digital screen, glass or display is utmost valuable, a fact that molds every application, notation or message down to a cypher. What we have already today, is a beautiful sea of icons. A sign language, comparable to the Egyptian hieroglyphs, yet understood worldwide and therefore world’s first truly global language. 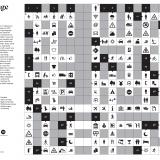