1,3 Billion Chicken Wings are munched away by Americans just for the event of Super Bowl. Thus it should come to no surprise that in order to satisfy our appetite for meet, worldwide 6.000.000 chicken have to be slaughtered every hour, as well as several million cows, pigs and sheep. And our hunger for meat is only rising.

Due to livestock epidemics (classical swine fever and avian flu) in the nineties rules have been adapted in such a way that it has become virtually impossible for the average European butcher to remain slaughter himself. Consequently, there are limited alternatives to large scale slaughter houses, which are in fact killing factories with slaughtering lines with a maximum processing capability of 100 cows per hour, 200 pigs per hour, 300 sheep’s per hour and about 12.000 chicken per hour.

As cruel as this may sound, it won’t change. Since it is not likely that humans change their eating habits rapidly, one only can make this process less brutal and stressful. The layout and design of most slaughterhouses was influenced by the work of worlds most respected expert in animal science, Temple Grandin. She designed curved corrals with the high walls that prevent animals from seeing what is around them or glimpsing what lies at the end of their walk. Moreover it plays to their natural tendency to circle and return where they came from. This design, along with the design elements of solid sides, solid crowd gate, and reduced noise at the end point, work together to encourage animals forward in the chute.

Sure, the end result of a slaughtering line is always the same: a piece of meat on a Styrofoam plate wrapped in plastic foil. But as Ms. Temple Grandin has shown, good design is able to generate circumstances that give death more dignity. 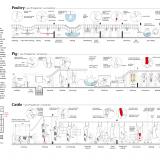