At the International Meridian Conference in Washington in 1884, at which the prime meridian was adopted, the Canadian engineer Sandford Fleming proposed his idea of ​​a universal time. The world should be divided into 24 zones, with 15 degrees of longitude each corresponding to an hour - the planet earth as a dial. Fleming imagined that in addition to this universal time, people would introduce individual local times.

The conference ended with a compromise. Each state was given the freedom to choose its own time zone, starting from Greenwich in the time zone ± 00:00, resulting in the 38 time zones of today. The reasons for designing a new time zone are often political, as the example of Venezuela shows. Hugo Chavez, the country's former president, turned the clock back half an hour to UTC -04: 30 in order not to share the time zone with his archenemy, the USA.

With the introduction of time zones, the world was formally divided into ‘Spaces of Time’. A time zone is an island in time that is chronologically separated from the rest of the world. 9/11 occurred in the late afternoon in Europe, while it was morning in New York. Russia celebrates the end of World War II on May 9, while Germany surrendered in Berlin on the late evening of May 8, at a time when it was already May 9 in Moscow. Imagine two neighbors standing by their garden fence and talking to each other. However, the fence is exactly the boundary between two time zones. Although both persons can confirm the conversation, it did not take place at the same time. For one it happened at 2 p.m., for the other at 3 p.m. An international arithmetic formula ultimately helps to solve this paradox.

If every time zone is a self-contained ‘Space of Time’, then there are consequently 38 different versions of planet earth. Entering a new time zone means entering a new earth space in which a completely different time and space regime prevails. 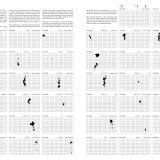