in collaboration with ABT-Delft, March 2008

Super Mo is awaiting you. Super Mo is like a huge friendly giant settled down in the lawn of Central Park, enjoying the chipper activity on its legs and arms, happy to be experienced by curious visitors. Super Mo is humble; in fact the tower is much taller than it dares to reveal. Fully raised this giant would grow to a staggering 1.182 meter height, gradually rising from the soil.
Super Mo is not up, Super Mo is uprising. Super Mo starts shallow and ends fulminate. In fact Super Mo radically eliminates the drastic confrontation between human kind and tower. The horizon is not besieged by verticality but enriched by different interpretations of both. The slowly uprising planes are intriguing and one could, if captured by an intense dialogue or an intensive daydream, awake suddenly at the height of 150 meters. Super Mo arises from the plain. Through its non-horizontality and non-verticality it is both ground and sky, it’s five sticks point out and embrace the whole universe, the other end of the earth and the entirety of Cheongna site.
By dissolving the tower into a multitude of sticks, the usually ever repeating one-liner design of a tower, turns into a multi-textual novel, which can be read by every visitor in a different way; as its facades appear different from every viewing point. Super Mo has not one elevation but at least a hundred. The five stick structure generates various routes throughout the tower. With the help of ramps, stairs, elevators and escalators, one can experience over 3200 meters of routing throughout the tower without ever walking the same path twice. Super Mo consists of a series of vertical loops which become even more stretched by the adjacent theme park.
Super Mo introduces a totally new character to the architectural alphabet of towers, while at the same time adding a new character to the skyline of Cheongna, to the image of Incheon and possibly to the distinctiveness of South Korea.
With Super Mo South Korea is releasing a positive message to the world. By avoiding the one and foremost line of every tower, the vertical; Super Mo becomes a symbol for world’s increasingly multicentral global society, a society which supports each other to achieve greater heights than ever achieved before. At the same time the city image of Cheongna as an Open Window to the World becomes enhanced by Super Mo as it´s symbol. Super Mo as a poly-form window onto a polycentric peaceful global society- finally, democracy receives its expression in tower design.

Super Mo looks like a lucky coincidence, yet in fact it is a perfect composition, thoroughly designed and constructed. Every sticks purpose is to serve the whole, while at the same time maintaining their individual direction and meaning. The positioning of the sticks is based on a number of different factors: topography, astrology, and also locality. These factors are best illustrated in their names: Cheongna, Mount Mani, North Star, Seoul and City Tower.

The Cheongna stick grounds Super Mo to its immediate site, the new city of Cheongna. The Mount Mani stick with its monumental Sta[i]rway, provides the visitor with an excellent near view to nearby Mount Mani. The North Star stick points towards the North Star, creating a direct link to the Universe. The Seoul stick supports the restaurant and points towards the city of Seoul. Finally the City Tower stick, the highest point of the tower, also functions as sundial telling its time on the master plan. 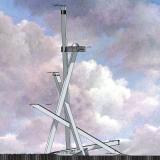 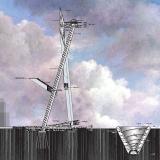 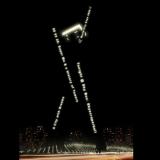