The Colours of Terror

Currently, there are over 180 terrorist organizations worldwide. Unlike secret criminal societies like the Mafia, whose main objective is economic profit, terrorist organizations are threatening the power monopoly of existing nation states. To be recognized as a genuine opponent of a sovereign state and to distinguish itself from comparable movements, the terrorist group has a flag, a coat of arms and sometimes even an anthem.

To finance their endeavors and to accumulate a critical mass of supporters, terrorist groups often avail themselves of popular pre-existing ideologies and alliances. In the case of Communism (Red Period), the hijacking of a well-prepared body of people worked quite well from 1960 to 1980. Communism formed the basis of many wars in Africa and East Asia. After the fall of the Soviet Union, religion – Islam in particular – emerged as a political ideology that attracted a multitude of members. The 1990s saw a new wave of terrorism that was rooted in a milder form of Islamism (Green Period), but that phase swiftly advanced to become the radical Islamism (Black Period) we face today.

Terrorism is the most extreme and violent version of political opposition. Radical terrorists follow a political programme based on the staunch belief that their group is good and all others are bad. All types of terrorism are faced with the same dilemma, however: how to explain convincingly why it is right to kill. 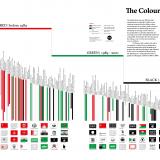