The Image of Europe

To mark the occasion of Austria's 2006 Presidency of the European Union, the exhibition ‘The Image of Europe, first shown in Brussels in 2004, was updated and extended. The title plays upon the double meaning of the word "image" – implying both representation and perception. Where the exhibition examines the ways in which Europe is represented - through words and symbols, the symposium addresses the ways that Europe is being perceived – by those inside and outside.

In 3000 years Europe has given us fascism and democracy. Not surprisingly, over the past fifty years it has been trying to reinvent itself. Instead of accepting its complex history as an alibi to excuse more turmoil and tragedy, it decided to reverse history.

After World War II, visionary politicians created a new structure with new codes of behavior for the entire continent in a series of highly improvised steps and arrangements. Because the operation was so radical, it could only take place by stealth; for the initial part of the EU’s existence, its ulterior motives could never be openly stated. Because of the complexity of the operation, the treatises and blueprints that defined the new Europe were hard to communicate.

For the average European, the EU now is a parallel universe that coexists – inexplicably and unexplained – with the real world as we know it. Too often, this double life has been perceived as negative – as if the "blue" territory of Europe would take away our national identities; in fact the creation of a new Europe gives each of us new space to imagine ourselves. At 50, the EU has accomplished Schengen, the euro, prosperity, and lasting peace. This exhibition celebrates an end to its inhibited iconography, its coming out. From now on the EU will be bold, explicit, popular… 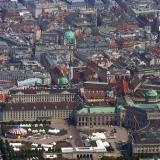 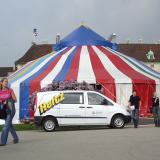 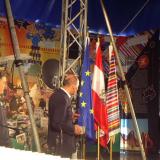 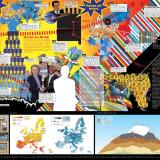 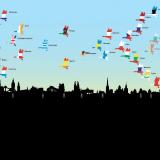