Without a doubt, Monopoly is the world’s most commercially successful board game, with over 200 million games sold in 82 countries, translated into 26 languages, and with more than 750 million players.*
The earliest version of Monopoly (called ‘The Landlord's Game’) was patented in 1904 by Elizabeth J. Magie Phillips, a Quaker who hoped to illustrate the negative aspects of concentrating and in private monopolies. The Parker Brothers company was the first to commercially published the game in the 1930s,
with Atlantic City as the role model for the city along whose streets properties are still ‘on sale’ in many Monopoly editions around the world.
The game’s geographical dispersion shows that Europeans seem to be much more attracted to this economic game than its inventor’s home country, the USA. The core of Europe (Benelux, Germany, Great Britain and France), with 146 city editions – 60% of the world’s total – is by far the most permeated region of the world. A sure sign of how Monopoly has transitioned itself smoothly into today’s European culture.
Monopoly teaches ruthless entrepreneurship, aimed exclusively at owning every piece of property and driving all opponents into bankruptcy. The best preparation for times like this? 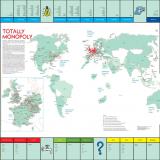