The modern utopian city finds its origin in the renaissance where the discovery of new continents and the appearance of the first non-autocratic governed nation states in Europe generated hope for the emergence of ideal societies located in paradisiacal territories. New technologies and political ideologies as well as the overcome of two World Wars released an unprecedented avalanche of utopian ideas in the 1960’s and early 1970’s, when it was almost compulsory for architects to design a utopian city. The massive increase of world’s population together with the promise of cheap and everlasting energy through nuclear power and the moon landing gave the need for utopias an extra boost.
The oil crisis and the Club of Rome report “The Limits to Growth” in the 1970’s was a smack in the face for most of these high flying ideas. The utopian idea did not recover yet and still gets beaten up and kicked by reality. With a society disorientated by the evaporation of the two last ideologies: communism and capitalism and with an earth that is on the brink to collapse, a sound base for a positive utopia is further away than ever. 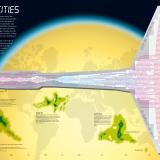