Vitruvius Killed by Water on Mars

With the discovery of water on Mars it turns out to be feasible to erect human settlements on the Red Planet. But where, what and how?

Old rules like the ones formulated by Vitruvius more than 2000 years ago won’t work here anymore. If urban planners and architects listened carefully to Stephen Hawking, they should nervously work on the development of new strategies for extraterrestrial settlements on Moon and Mars. This April* the renowned scientist reiterated his statement saying that human race in order to survive needs to spread out into space because life on Earth is at the ever-increasing risk of being wiped out by a disaster, such as sudden global warming, nuclear war, a genetically engineered virus or other dangers we have not yet thought of.
Producer: Theo Deutinger 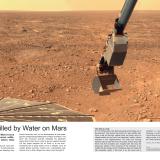