On 10 December 1948 the Universal Declaration of Human Rights was adopted at the United Nations headquarter in New York, the same city that was the stage for the attacks of September 11 2001 on the World Trade Center. As a reaction to 9/11 the United States initiated the attack of the two nations Afghanistan and Iraq and started a worldwide hunt for suspect persons that got chased and detained by the CIA.
The suspects of this global war on terror are detained at mysterious places under inhuman conditions. To enable special treatments of prisoners, inaccessible places for detention-camps were chosen, laws were changed and definitions are watered down; e.g. to evade the Geneva Convention the suspects arrested are classified as "illegal combatants" rather than “prisoners of war”.
Seen in this light, America’s global war on terror has turned out to become a global war on human rights with Europe as its blind partner. 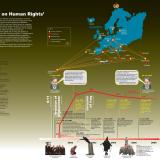