You shall be urban

The definition of an urban population varies widely from country to country. Of the 228 countries for which the United Nations compiles data, roughly half use administrative considerations, 51 distinguish urban populations based on the size or density, 39 rely on functional characteristics, 22 have no definition of ‘urban’ at all and 8 countries define all (e.g. Singapore) or none (several countries in Polynesia) of their populations as living in urban areas. Within Europe the differences are as extreme. While for example in Norway urban substance is defined by 200 and more inhabitants, in Italy a locality needs at least 10.000 people to be recognized as urban area. If Italy would apply Norwegian standards it would be suddenly inhabited by millions of new urban dwellers. 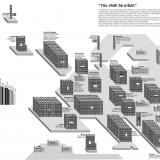