Core & Periphery / Beyond Plan B

this study is developed within the framework of "Beyond Plan B"; organized by Helmut Thöle, supported by the Stimuleringsfonds Creatieve Industrie

In order to understand the influence of the Rhine area and the area that influences the Rhine area, it is necessary to investigate its context. A collective of factors (demographic, cultural, infrastructural, etc.) make the area along the river Rhine to a focus zone within Europe. We try to mistrust this fact as much as possible in order to redefine its current condition.

Europe does not have a clearly defined center or core but one can surely talk about a certain centrality, from a core zone, which is economic, institutional and cultural dominating. In our part of the project Beyond Plan B we go on a quest for Europe’s periphery and core with the help of economic, social-political and cultural parameters.

What happens to high density areas can be explained with the core-periphery model which constructs the link between areas of high concentration to areas of low concentration of, inhabitants, trade volumes, infrastructure, etc. The most intriguing part of this model is its scalelessness, thus it is not only applicable to cities but also to villages and social groups as well as to the world at large.

In our study we investigate Europe in the light of the core-periphery model to either prove it or trash it but as starting point it helps us to reorganize this vast atomized space.

Since the financial crisis hit the Euro Zone the word ‘core’ got used frequently in attempts to describe the economic differences within the European Union, which for some poses a threat while for others it is a reassurance of their seemingly strong position. Generally it is assumed that Europe’s core is financially healthy, well educated and blessed with less corrupt administration. “Europe might be sick, but at its core it is healthy”, this is the image most Europeans, which are of course from the core, want to present to the world outside. But is this true? What and who is the core?

Generally, the core is a myth. Since we learned that not the earth is the center of the universe, we know that everything is circling around everything. Even our sun is, only is the center and fix within our solar system, because if one zooms out it is clear that also she is circulating around a core in the galaxy, which itself is again circulating and so on and so on. Another fact is that standing right at the core and in the center, it is impossible to realise ones position and the scale of it. It need messengers that provide us with news and gossips from the periphery/core or one needs to go there themselves, anyway, something has to move to be able to realize.

Everything is both, a center and periphery simultaneously. Being core or periphery is a relative condition that depends on the current perspective and context. Thus if we talk about a core (or center), it only can be a core on the move and a core in a specific scale, at a specific moment in a specific genre, with dynamic observers. Only in this light the current economic discussion about core-Europe and periphery-Europe can be discussed since we have to accept and respect the economic unstable condition of this core. By the time this text will be read a disintegration of this core can already be set in motion, or even at the time this text is written this disintegration of Europe’s core could be fully under way since I could be simply not aware of it.

Next to the economic reality there are also spatial, demographic, cultural realities and if we choose to define the core for example by the density of population, than there is no sign of disintegration in Europe. To the contrary, the Europe’s core zone, which was once defined by Roger Brunet as Blue Banana and has taken on since then various shapes but never really left the area spanned between Liverpool and Genoa, with the river Rhine at its center, is still gaining people while Europe’s periphery (in demographic sense) is gradually thinning out and is becoming ever more peripheral.

Seen in this light, Europe’s core seems to intensify rather than disintegrate. If one looks at infrastructure densities, headquarters of multinational corporations or hourly wages, in each of these values the core is much better off than the area we call periphery. No wonder that for example Italy is not getting tired to point out that it is not at Europe’s periphery with the hint that it is at least one of the founding member states of the European Union, an idea which was born in the center.

All founding members of the European Union are “Blue Banana States” and the EU’s major institutions are all based within its core zone. The juvenile core-community had at its beginning still competition from the EFTA (European Free Trade Association) which was in the 1960s referred to as the “Outer Seven” while the EU, called EEC (European Economic Community) at that time, was nick-named as the “Inner Six”. The Suez Crisis made the UK rethink its geopolitical position in Europe and provided the incentive to switch sides from the “Outer Seven” (with its numerical majority) to the “Inner Six”. From that time on the battle was won for the group now called European Union and from that time on it kept on expanding outward.

But what is the nature of this EU expansion? Of course one has to apply to become a member but how much pressure is there on non member states? How much dinner invitations does one miss if one is not a member of this club?

Is the EU expansion a spatial, a geopolitical project? Or is it, as often presented, a redistribution project which gives money from the rich (the core) to the poor (the periphery)?  Or does the core need cheap labour within its free market-economy?

Spatial expansion always involved spatial planners and triggered fantasies of future occupation. Not so with the EU expansion. No strategic masterplan seems to exist for the new territories that joined the soft empire. Instead an unprecedented library of rules and standards needs to be taken over by each new member state. But each and every little rule in this compilation has the ability to influence the physical landscape of the member state. Most of theses rules are not indented as regional or urban planning tools but e.g. to protect the health of the citizens or in the case of “Natura 2000”, to maintain or increase Europe’s bio-diversity. Thus unnoticed (or not?) the spatial organization and layout of the European Union transformed but not through planning but govern. Maybe this subversive planning style is nothing new and always has been the strongest tool for shaping the cities? Are the rules and laws of the EU just like the market rights in the Middle Ages and the defence strategies in the Renaissance?

These are some of the main questions we are dealing with right at the moment.

We intend to avoid this trap but also to step into it, wholeheartedly.

The idea of core and periphery is very simple. All it states is that some areas develop faster because of human and physical advantages and turn into the core and other areas that lack human and physical advantages become the less important periphery. Core areas are likely to experience greater growth, investment and net migration gain, while the peripheries may well be exploited and suffer from lack of investment. Below are three models that attempt to explain the development of core and periphery areas. http://greenfieldgeography.wikispaces.com/Global+core+and+periphery

Core / Periphery Division of the WorldThe world can be perceived as a core / periphery dichotomy where core countries are characterized by high levels of development, a capacity at innovation and a convergence of trade flows. The core has a level of dominance over the periphery which is reflected in trade and transportation. Accessibility is higher within the elements of the core than within the periphery. Most of high level economic activities and innovations are located at the core, with the periphery subjugated to those processes at various levels. This pattern was particularly prevalent during the colonial era where the development of transport systems in the developing world mainly favored the accessibility of core countries to the resources and markets of the periphery, a situation that endured until the 1960s and 1970s. The semi-periphery has a higher level of autonomy and has been the object of significant improvements in economic development (China, Brazil, Malaysia, etc.). Concomitantly, the accessibility of the semi-periphery improved, permitting the exploitation of its comparative advantages in labor and resources. http://people.hofstra.edu/geotrans/eng/ch2en/conc2en/coreperiphery.html: 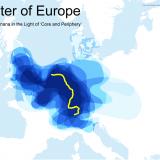 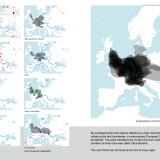 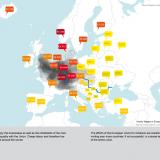 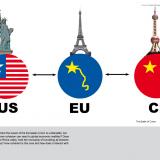 In order to understand the influence of the Rhine area and the area that influences the Rhine area, it is necessary to investigate its context. A collective of factors (demographic, cultural, infrastructural, etc.) make the area along the river Rhine to a focus zone within Europe. We try to mistrust this fact as much as possible in order to redefine its current condition.