Our proposal for the new city "Europe in Africa" is presented in the exhibition "Solution or Utopia" at the Stedelijk Exhibition in Amsterdam.

EIA goes beyond the refugee crisis and the short-term events. Europe in Africa is a tabula-rasa project comparable to city-founding in the New World, the ISS, populating the Moon or Mars. Right now we are imprisoned on “Spaceship Earth”; every square meter is owned by a state or a private person. As soon as people start to move they enter “foreign” territory. There is a total gridlock situation which is in fact very young. Some 200 years ago, before the rise of nation states and before the land surveying, there have always been some pockets to flee to.

Europe in Africa is carving out an undefined territory, a new land, a white spot. Yes it is about refugees and it is about helping the people but there is also the ambition to establish a model; in the long run it is also a rescue boat for human kind. It is necessary to make clear that Europe in Africa is an experiment and that it needs to be made not only because of the humanitarian crisis at the moment but for all humanitarian crises that we will face in the future.

A wonderful scale model has been produced by Studio KU+ http://www.studiokuplus.com.

PS: The fantastic murial in the background is done by Dre Urhahn and Jeroen Koolhaas >> www.favelapainting.com 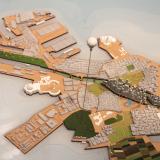 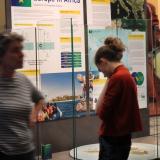 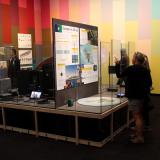