TD, commissioned by droog, developed "Social City Beta". A first proposal for a future city based on all the dreams and desires of city dwellers worldwide taken from an extensive poll of the socialcities.org platform.

Social City Beta is a mock-up. Social City Beta is a dreamland, a playful urban setting with endless possibilities. The aim is to spark the discussion between the experts and the citizens about the future of our cities. Some interpretations are intentionally over the top, however nothing within its realm is truly impossible. With the use of already existing technology, advanced engineering and people's imagination such a city can become reality.

Learn how to get involved and give feedback about the proposal here. 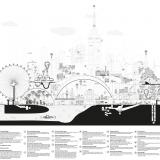